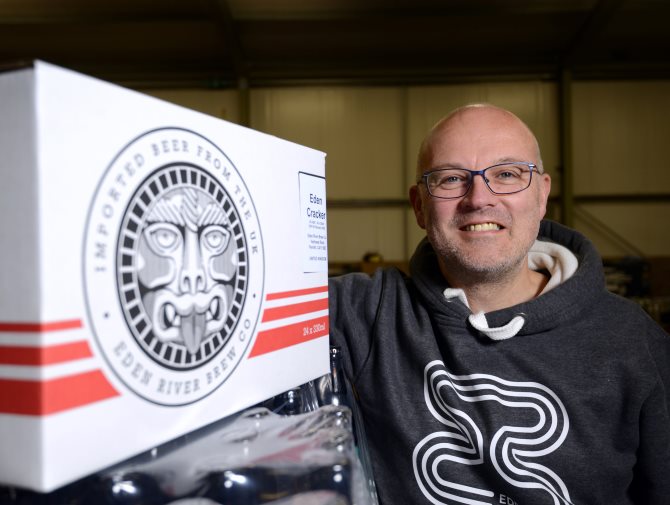 A brewery boss is celebrating quadruple success after securing two major deals, re-branding his business and completing a major revamp of its base

Jason Hill is now looking to the future with a renewed sense of purpose after taking his company to the next level with the help of not-for-profit lender, Enterprise Answers.

With a major supermarket deal signed and sealed and a huge consignment of his brews recently dispatched for the Far East, the businessman and craft ale aficionado is upbeat about the future.

Now he is planning to expand his team as new equipment is introduced into his brewery in Penrith, and demand for his products grows.

Jason said: “The last year or so has been quite a journey in terms of how we have moved the business forwards. There are still challenges, and I’m sure there always will be, but a lot of the things which were holding us back we have now addressed.

“Our new larger premises have given us the opportunity to brew in far greater quantities, we have a bottling line installed which is ready to go, and we are due to start dealing with a lot of our own packaging, so that means we can start to meet the demand out there for our products more efficiently.

“China was a big win for us and that came about after we went across to Food and Hotel, a three-day exhibition in Shanghai, as part of a trade mission organised by the DTI.

“I very much see export out of Cumbria – and the UK – as where the bigger wins are because there is only so much in the county.

“I have an eye on emerging markets, for example India and Russia. South Korea has potentially got options; there are a lot of opportunities out there.”

The first China deal saw more than 36,000 bottles of craft ale shipped at the end of March while a second order left in October with 38,000 bottles in a container.

Meanwhile the Morrisons deal, which is the product of a long-term conversation with buyers at the supermarket giant, is on an extended distribution basis which will see Jason’s craft ales for sale across Cumbria, the North East, Yorkshire, Lancashire and into the Midlands.

The first shipment of products – bottles of Eden Gold and First Emporer – left the brewery in November.

“I’m really pleased with the Morrisons deal as it is our first national supermarket. We are already in Booths and at Tebay in Cumbria and Gloucester, but this does give us a wider reach.

“We needed to get out of our old base and into the new premises with equipment which would increase our capabilities. None of this would have been possible without Grahame at Enterprise Answers.

“Trying to borrow money in the current climate is very challenging. Banks are risk-averse; in fact many people are in the finance sector are risk-averse at the moment.

“Without Grahame and the funding he has arranged, we would not have been able to achieve what we have achieved.”

Eden Brewery was founded in 2007 and until last year was based out of Brougham Hall in Penrith. It moved to the Gilwilly Industrial estate in summer 2017 and £90,000 has since been invested in new equipment.

It is not just new premises and major deals which has the team at Eden River Brew Co smiling, however.

A rebrand of the company – it was formerly known as Eden Brewery – was recently completed to project a more modern and edgy image. A reimagined logo was designed to fit in with the new brand identity.

While the traditional range of beers still exists – there are six; Eden Gold, First Emporer, Eden Cracker, Eden Best, Eden Pale and Eden Fuggle – they are complemented by a number of craft canned beers.

He said: “The business had a well-respected brand, product range and had traded profitably for the previous three years.“

“Jason needed to move to his current premises as sales had doubled in last three years and our finance has helped the business to relocate, purchase new equipment and continue its growth strategy.

“The product has a worldwide market and Jason sees no limit to where he can sell his beer. He is dynamic, committed and visionary.

“Since we helped with a finance package, there has been tremendous progress in all areas. The relocation to larger premises has enabled the business to scale up to meet demand, a new head brewer has been recruited increasing the skill set within the company and a second order just shipped to China is testament to Jason’s ability to sell his beer anywhere in the world. Global demand for a product brewed in the heart of the Eden Valley!”